Thank you for visiting our page. Sweet Dreams Bakery runs by pure fun, passion, and enthusiasm for making delectable sweets that pleases the eye and tummy.

I'm currently not taking any new orders for the time being, but if you have any questions about what I do, how I do it, or wanted to just say hello, please feel free to send me a message me through my Contact Form! 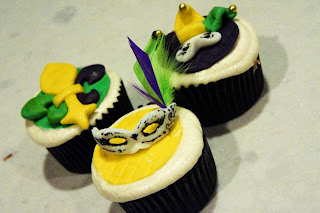 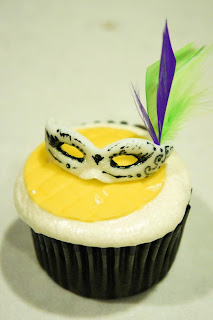 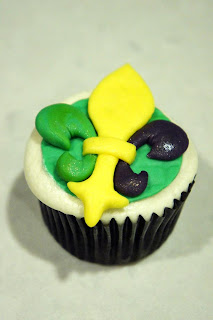 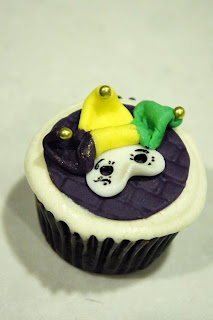 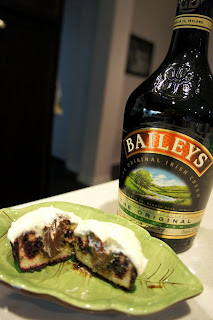 Mardi Gras! These are Bailey Irish Cream Cupcakes with Baily Chocolate Ganache filling and Bailey buttercream! All the decorations are made of fondant, the balls on the jester's hat are metallic pearls, and the designs on the masks are painted with black food coloring. Also, I normally don't like to use non edible things for my decorations, but I couldn't resist using the feather for the first mask! I also gave the cake itself a Mardi Gras marbled look as well by coloring the batter purple and green and leaving some of the original batter color to make the 3 traditional Mardi Gras colors! Thanks Chi Hai for the suggestion! Anyways, these were definitely a challenge to make only because I had issues with the frosting, but alas, it's done! Enjoy these fun facts below about Mardi Gras!

Fun Facts:
Mardi Gras means "Fat Tuesday" and alludes to the over-indulgence of this day. The word "fat" may also be referred to the fattened ox that was paraded through town before being sacrificed at a mid-winter, pagan fertility celebration. Purple, green and gold are the traditional colors of Mardi Gras. Purple represents justice, green is faith, and gold symbolizes power! One of the most popular traditions of Mardi Gras is the King Cake, which is a coffee cake pastry with a plastic baby inside. Traditionally, whoever finds the baby in his or her piece of cake is said to have good fortune throughout the year and must provide the King Cake for next year's party.

Also, apparently the tradition of bead throwing didn't come about until the 1880s. One of the Krewes (an organization that puts on a parade or ball for the carnival season), originally dressed up as Santa Claus, and tossed out glass beads! It was a great hit and by the 1900s, beaded necklaces became the throw of Mardi Gras. Then around the 1970s, the glass beads got replaced with cheap plastic and aluminum beads, and earned the thrower a flash of flesh. The obsession with the flesh links back to the original celebration by the Romans. The Romans celebrated the Lupercalia festival in honor of the fertility and agriculture gods, and had Mardi-Gras like qualities that include drinking, feasting, and "pleasures of the flesh". Eventually, this holiday because adopted as a "last fling" of indulgence before the 40-day Lenten period of Penitence.

So next time you celebrate some with traditions, be curious and ask questions as to how they come about. It'll give you another perspective to the festivities and you'll be able to enjoy it like it's the first time! Learn something new everyday don't we? Happy Mardi Gras!

Welcome and thanks for visiting Sweet Dreams Bakery's blog page! I love to decorate and make sweets look pretty and tasty. I am an animator by day, cake decorator by night! This blog is to document all my lovely creations and my progression throughout the years and to share my sweet arts with all of you! To learn more, click here!
Contact Us!
Become a Fan on Facebook!